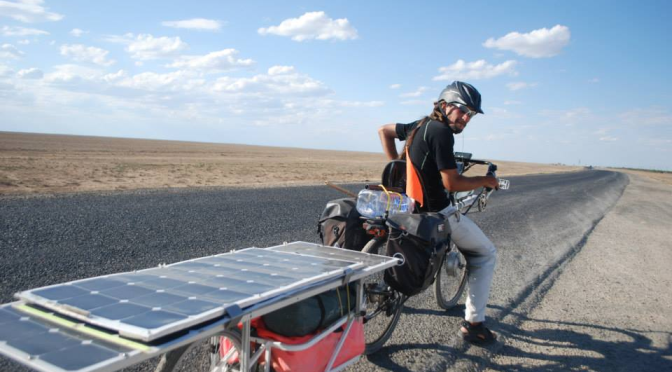 This is not the first time we have talked about ebikes equipped with solar panels. It’s the perfect solution: what could be better than taking advantage of the sun to charge your ebike battery? Drawing attention on these topics and encouraging the research are the main goals of the Sun Trip 2015: a 7000 kilometers trip between Milan and Cappadocia (Turkey) riding solar-powered electric pedal vehicles.

The departure has taken place on June 6th from the Sforza Castle in Milan (which is currently hosting the International Expo). The itinerary is a 7000 km loop: you can go in a way, or the other way around. You can get to Turkey riding through Italy and Greece or through the Balkans and Bulgaria. The only two mandatory stops are Cappadocia and Antalya, the next Expo city.

100 people applied to take part in the race. Only about 30 were selected. Among them, there’s Raf Van Hulle, a 39 years old Belgian that won the Sun Trip 2013. As you can see from the photo below, his vehicle has two solar panels, one on the front of the bike, one on the back on a trailer, and a back hub-motor. Thanks to this vehicle, Raf was faster than everyone else and in 2013 he was able to cover the whole itinerary with an average of 200 km/day.

Anyway, panels don’t power the motor directly, but the battery. The battery of these vehicles, according to the rules, can have a  1100Wh maximum capacity and a 48V maximum voltage. Sun Trip vehicles can only have one motor for each person (therefore tandem bikes can have two motors), with a maximum speed of 45 km/h. The assistance can be activated through a sensor or a throttle. The solar panels must have a 1000Wp (Watt-peak) maximum power when the ebike is not moving. When you’re riding, this value must be between 100 and 500Wp (exposing a wide portion of solar panels can be dangerous if windy). Participants can take a charger with them, but it will be sealed. They can use it in case of emergency, but they will be disqualified if they do so.

In 2013, only 9 participants out of 30 were able to ride through the whole itinerary using solar power only. “A few people” you could say, but the itinerary included dirt roads and paths with many holes, which made it easy for solar panels to break.

The vehicles we showed you in this article are quite interesting, but not very practical for an everyday use.
The surface required to charge batteries with solar panels is still too wide to allow these vehicles to become popular.
Of course, events like the Sun Trip can be an encouragement to the research so that we can find a suitable solution. But the real progress will be made when solar panels will be more efficient, and we’ll be able to use much smaller panels. At the moment, the best way to take advantage of solar power when charging your ebike battery is through your house’s solar panels, or if we think about bike sharing, on rent stations’ roofs.

All photos are courtesy of thesuntrip.com

This website uses cookies to improve your experience while you navigate through the website. Out of these, the cookies that are categorized as necessary are stored on your browser as they are essential for the working of basic functionalities of the website. We also use third-party cookies that help us analyze and understand how you use this website. These cookies will be stored in your browser only with your consent. You also have the option to opt-out of these cookies. But opting out of some of these cookies may affect your browsing experience.
Necessary Always Enabled
Necessary cookies are absolutely essential for the website to function properly. This category only includes cookies that ensures basic functionalities and security features of the website. These cookies do not store any personal information.
Non-necessary
Any cookies that may not be particularly necessary for the website to function and is used specifically to collect user personal data via analytics, ads, other embedded contents are termed as non-necessary cookies. It is mandatory to procure user consent prior to running these cookies on your website.
SAVE & ACCEPT