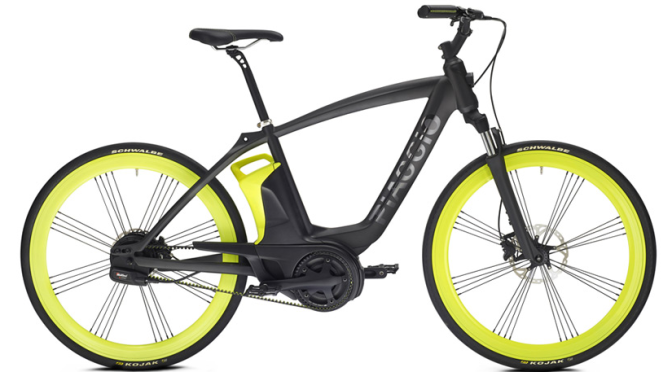 We’ve been talking about it for more than a year, but now it seems that the moment has finally arrived: the Piaggio ebike should be available to the general public very shortly. It’s a vehicle which will surely be the object of a great interest among the wider public: that is why we have decided to dedicate an in-depth article to the Piaggio ebike. First of all we present the technical datasheet of the ebike as we know it, moving on in the second part of the article to some general ideas about what a Piaggio ebike will mean for urban mobility in general and for the electric bike world in particular.

The only images to make the rounds on the internet speak of a rather sporty-looking ebike. As far as we know, however, the Piaggio ebike should eventually actually be available in a wide range of declinations, including some more city-oriented versions (think rear rack or mudguards).

We will therefore limit ourselves to talk about those electrical and mechanical components which should be common to all models, waiting to get to know better the ebikes which will actually be available. 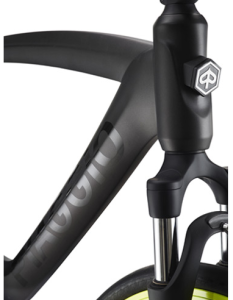 The Piaggio project is ambitious: they have decided to design their own motor, without using one of the many available ebike motors. It’s a central motor (positioned between the pedals) working directly on the bike’s transmission. Central motors one of the main trends in the whole ebike sector. The motor will be available in two versions, a 250W and a 350W version: as we know, only the first version will be considered just like a “normal” bicycle in Europe, while the 350W will be considered a speed-ebike (in countries where this category does exist, such as Germany, Switzerland, the Netherlands) or simply a motorbike (in other European countries).

The Piaggio ebike has a torque sensor able to pick up the effort made by the cyclist. The DEA (Dynamic Engine Assistance) systems looks set to be very interesting. It will make two things possible: it will be possible to precisely tune the power delivered by the motor for each assistance level (rather like in the new Bosch Nyon system); it will also be possible to set a standard power deliverd by the cyclist (for instance, 100W) and let the control unit finetune the assistance delivered by the motor, turning it up or down according to whether you’re going uphill or downhill. Very important, in order to do this, will be the role played by the automatic, continuously variable transmission system (see below). It will also be possible to connect to a heart rate monitor in order to fine tune the power of the motor according to the heart rate of the cyclist.

The ebike will have a 400Wh battery, a good capacity which will definitely guarantee a wide range in most urban situations, also allowing for some extra-urban trips. Though it will probably be a bit on the short side for a electric mountain bike (but, as mentioned, we do not know whether this Piaggio ebike will also be available as a e-mtb).

As far as we know, the ebike’s functions will in part be activated directly from the user’s smartphone, contributing to the aesthetics of the ebike by removing a screen. There will also be some buttons on the handlebars, probably to guarantee that the most usual functions (such as changing the level of assistance) can be fast, easy and safe. A USB port will make it possible to recharge electronic devices (such as a smartphone); it will also be used to update the software of the control unit. The diagnostics will be done wirelessly, either through a smartphone app (simple diagnostics) or through a tablet in the workshop (for a more in-depth diagnostics). When you park the ebike and you walk away from it. Interrupting the Bluetooth connection, the control unit turns off and the ebike cannot be used.

The Piaggio ebike will also have a GPS and a GSM module, as seen on the Stromer ST2. This means that it will be possible to communicate with the ebike from any distance, having access to data concerning its position and the battery status.

Once the app has access to the data coming from the GPS, the battery, the motor, once it has local maps with elevation data and more, it is possible to have a wide range of interesting functions. For instance, setting up a certain route, the control unit can manage the power of the motor in order to ensure that you can complete the route. Or you could have an alarm set off when you are going too far from your starting point and you risk not having the battery life necessary to come back. Piaggio calls this range of functions a “Smart Navigator”.

The transmission is also very interesting: power will be delivered to the rear wheel through a belt and an automatic, continuously variable NuVinci gear shifting system. Those who follow us regularly know that we strongly believe in automatic transmissions for ebikes, especially in an urban environment. The task of slowing down the ebike is given to two hydraulic disc brakes of 180mm and 160mm. We have no information concerning the price of the ebike.

The Piaggio ebike, the ebike sector, and urban mobility

Piaggio’s decision to plunge into the ebike sector is a very important one, for many different reasons:

Piaggio’s decision to get into the ebike sector is a very positive development, for many reasons. More competition and more choice can only be good. Piaggio has the potential to greatly expand the use of ebikes in Italy and in Europe, especially if it will be ready to fully exploit its dealers network. We hope that this will be just a new piece in the mosaic of spreading the use of ebikes as a daily transportation vehicle in Italy, in Europe and beyond.